The New England Police Benevolent Association, Local 406 with the support of O’Maddi’s is holding a candidates forum in the Community Room of the Brown Public Library on Wednesday, February 22 from 6 – 8:30 p.m. The forum will allow each candidate to make a statement in an order drawn by lottery and each will have five minutes. Then, each candidate will be provided with a series of predetermined questions which they will answer. Eligible voters who wish to ask questions will raise their hand to be recognized by the Moderators. The Moderators will determine the order of questions. Questioners will have no longer than 30 seconds to state their questions. The questions can be directed to an individual, all the candidates, or any combination and in an order determined by the questioner. If no order is defined, the candidates will respond on a rotating basis as determined by the Moderators. The response from the candidates will be no longer than 90 seconds. The questioner will state their name and address. Ineligible voters, as determined by the Moderator, will be asked to hold their questions until after the formal meeting and speak to the candidates individually. Candidates will not answer questions from ineligible voters. Then, Each Candidate will be given 90 seconds for a closing statement. Closing statements will be in the same order as opening statements. Candidates will be able to continue their conversations after the formal meeting with interested parties.
Posted by Unknown at 7:32 PM No comments:

The Northfield Democrats will be holding the Democratic Town Caucus on Saturday, April 2nd at 9 am at the community room in the Brown Public Library for the election of six delegates to the state convention on Sunday May 22nd at the Barre Opera House. All local Democrats are welcome.

Sen. Pollina will be in Northfield at the Square Biscuit this Monday evening from 6-8pm.

This is a public meeting to talk about issues (health care, budgets and whatever else) and ask questions. Everyone welcome, the restaurant is open, you can order off the menu – or not.

Vermont continues to face serious revenue shortfalls and dramatic cuts to important safety net programs and services are being considered. The House has restored about half of the money cut from mental health services and disability program cuts. It is important to talk to our senate delegation to ensure that progress is maintained (at a minimum).

Can we continue to "cut" our way out of the deficit? Are we all "sharing the pain"? Or, is it time for the wealthiest 1% to give back a small portion of the Bush tax cuts to help working Vermonters, seniors, and people with disabilities weather the recession? Now is the time to make your voice heard on these important issues. So, I hope you will come out and share your views with Senator Pollina and ask him whatever other questions may be on your mind.
Posted by Christopher J. Curtis at 10:27 AM No comments:

Northfield Democrats will caucus Wednesday, July 21, 2010 at the Brown Public Library from 7-9pm in order to nominate candidates for Justice of the Peace.

"If you haven't made up your mind about which candidate to support, now is the time to kick the tires and hear what the primary candidates have to say," said Christopher Curtis, Chair of the Northfield Democrats. "We're pleased to have Matt Dunne, and any of the other gubernatorial candidates, come to Northfield to share their plans for Vermont," said Curtis. "Democrats are lucky to have five incredibly well-qualified candidates running for Governor this year," he said.

The local Democratic committee will also meet Wednesday, August 4, 2010 from 7-9 pm at the Brown Public Library. Most of the Democratic primary candidates for Washington County state senate have indicated they will attend either the July or August meeting. Democrats in Washington County have a 5-way primary for 3 seats. Incumbent Sen. Ann Cummings is running for re-election. The other Democratic candidates are Kim Cheney, Laura Moore, Donny Osman, and Anthony Pollina.

"The other really exciting race is for state senate in Washington County," Curtis said. "Democrats have a great slate to offer to try to maintain a Democratic seat and pick up an open seat this year, in addition to competing for the other Republican seat," he said. County senate hopefuls Anthony Pollina and Donny Osman are expected to be at the July meeting, Laura Moore will attend the August meeting. Kim Cheney met with the Northfield Democrats in June. "Because we are running such a strong slate of Democrats for state senate, we're very optimistic about our chances to pick up seats in Washington County," Curtis said.
Posted by Christopher J. Curtis at 10:09 AM No comments:

Public Assets Institute Presents "Looking Beyond the Recession" in Northfield 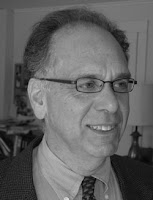 The Public Assets Institute (PAI) will present "Looking Beyond the Recession," an analysis of Vermont’s budget picture on Wednesday, April 7, 2010 from 6:30 p.m. to 8:30 p.m. at the Kreitzberg Library (Community Room) of Norwich University in Northfield, Vermont. The presentation by Paul Cillo, President of PAI looks at the current budget crisis, what future budgets may look like, and offers a balanced perspective on how Vermont can move toward a sustainable economic future using data and projections gathered from the Joint Fiscal Office, the Vermont legislature, and others.

"The economic crisis means many more Vermont families are struggling while the state’s ability to help them shrinks,” said Mr. Cillo. “The immediate crisis comes on top of decades of economic changes that make it increasingly difficulty to produce balanced budgets that meet Vermonters' needs," he said. “Our goal is to raise Vermonters’ awareness about the state's budget options so we can have a state that works for all Vermonters.”

Paul Cillo is the founder and president of the Public Assets Institute. He has been active in public policy work for over thirty years, as a local and state political representative, consultant on health care, education finance, and other tax and budget issues; and on energy efficiency. He represented Hardwick, Walden, and Stannard in the Vermont House of Representatives for ten years, serving four years on the tax-writing Ways & Means Committee and four as Majority Leader. During those years he designed and led the Legislature to adopt a groundbreaking education financing system that equalizes opportunity for all Vermont children, regardless of where they live.
Posted by Christopher J. Curtis at 8:07 PM No comments: 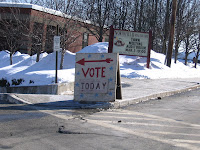 Northfield Democrats successfully organized the 2nd Annual Bake Sale to benefit CERV. Together, we raised over $120 in small cash contributions in addition to canned or non-perishable food items we collected. It's a fun and easy way to help our local food shelf. A big thank you to everyone who helped make it happen!

The Times Argus reported the news, but it bears repeating: for the second year in a row, our school budget passed the first time out. This is great news for the district. The school board has worked diligently to keep costs low and the budget in line. The budget passed by an almost 2-to-1 margin (552 - 307). Other items that passed included the town's spending plan ($2.2 million), and an increase in the percentage of voters required to rescind a school budget vote (from 5% to 10%). There were no contested races.
Posted by Christopher J. Curtis at 7:47 AM No comments: The next meeting of the Northfield Democrats is:

Democrats Representing Northfield in the Statehouse

Our local elected Democratic officials representing Northfield in the Vermont House and Senate are: